In last week’s Torah Portion, Naso we read of the laws of the Nazirite. The Nazirite was a man or woman who took vows of abstinence usually for a short limited period of time as a kind of spiritual retreat. I mention this “class” of Jew in “The Cave” several times. Firstly as an ancient example of institutional and moderate asceticism in Judaism and secondly as a kind of advertisement for the spiritual retreat movement. In the last stages of writing “The Cave” in 2005 I became happily aware of the Isabella Freedman Jewish retreat centre and its Elat Chayyim Spirituality programmes in the USA. I have yet to visit the USA but if their internet presence and comments on these institutions are anything to go by,as a European Jew I look forward to the day when similar facilities might be available here too.

(As a sideline comment here: Approximately 60% of the readers of this blog are from the USA. I find it rather strange that I wrote “The Cave” with a primary focus on British and European Progressive Jewry and yet only 8% of the visitors to this page are viewing from the UK. Perhaps that reflects a variation in the USA/UK levels of interest in Jewish contemplative lifestyles or in Jewish Spirituality generally. I hope not.)


The parshah of Naso also contains the Birkat Kohanim or “Blessing of the Priests” :


In 1994 whilst I was still living in Jakarta, I drew some illustrations in my personal Erev Shabbos (Friday night) prayer book which contained references to both Aharon and to the Birkat Kohanim. These pages were a re-working of the traditional “Blessing of the children” which often precedes the Friday night meal. Here are the two pages as they face each other in the original book: 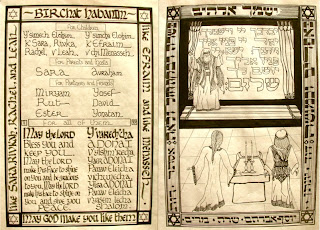 The right hand page shows a couple standing at the Sabbath table with its two candles. Their hands are resting significantly on the table which is apparently morphing into something resembling the temple Altar. Five steps away from them the room seems to melt away into the realm of anamnesis. (Well that was my intention anyway…..I’m no graphic artist!)

From this Timeless zone, and standing (as it were) on the “three steps” of the pre-Amidah ritual, we see a figure intended to represent Aharon reciting the blessing whose text appears as though suspended in space behind the curtains of an ark. 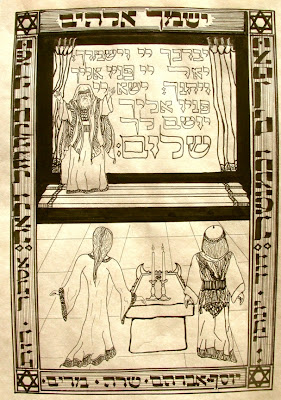 The left hand page was my attempt to find a way to adapt the “blessing of the children” by expansion. I  wanted it to be inclusive of those who were not in a “family” situation (whether by choice or circumstance) and to celebrate friendships and co-operatives as well as marital and filial relationships. For this reason I augmented the traditional “May you be like Efraim and Manasseh” with the names of some Biblical “partnership” or “gender” models.
. 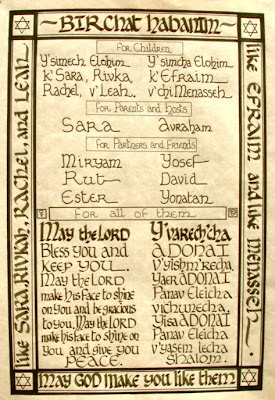 In December 1991 and long before I drew those illustrations, I had experienced a musical encounter with the Priestly Blessing. This was when I set the words of the prayer to new music. At the time I had never heard any synagogue music, Jewish prayer chants, or Torah tropes. The only sung hebrew melodies I knew were Hava Nagila and Tzena Tzena (!!) As a young Carmelite I had once heard an earth-shattering prayer from the Seder, sung in passionate Hebrew by the man who became my Rabbi (another story) ……. but that was it.

To be honest, I don’t feel justified in calling it “my composition” as this melody has the distinction of being the only piece of music I have ever composed in my sleep. I heard it, text and all, in one unexpected and disembodied “performance” during deep sleep. Jumping straight out of bed I hastily wrote it all down before I forgot it. Here is the notation of what I had heard: 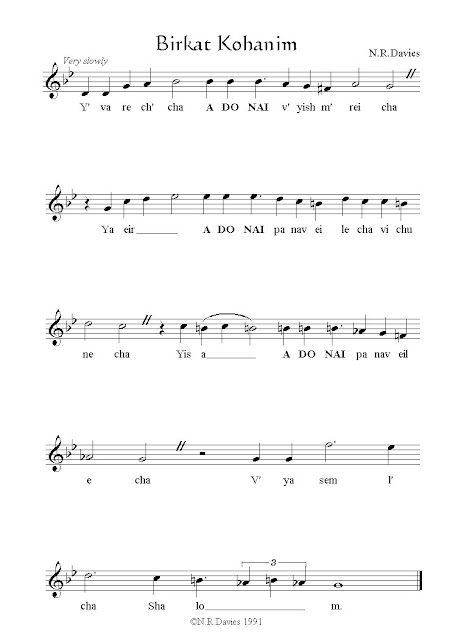 Or if you prefer it in a metrical version: 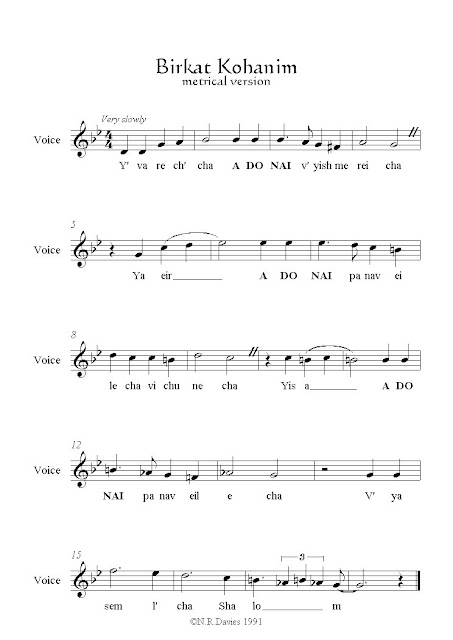 A few weeks ago I read an article on the EJP website (European Jewish Press) discussing the composition of Jewish households in Britain since the 2001 census. You can read the entire article HERE .


I was particularly struck by this statement:


“More Jews than almost any other religious or ethnic group live in single-person households. This fact, together with the large number of “Jewish households” in which not all members are actually Jewish, forces a rethink of the nature and boundaries of what is called the “Jewish community.”


“Jews live in every county and district in Great Britain. The identification of around 20,000 Jews in areas that were regarded as containing very few—for example, Northumbria, Cumbria, Derbyshire and Warwickshire—and where there are no formal communal facilities, is an issue that policymakers will need to take seriously”


I spend most Shabbos evenings alone. That has been the case for many, many years. In its full liturgical form, the Priestly blessing is one of the prayers which requires a minyan in many Jewish communities. Most Jewish texts assume that the Sabbath table experience is going to be a family or communal experience. It can be, but very often it isn’t. Expanding the “blessing of the children” ritual even further now seems imperative to me.

I wrote in “The Cave”

"Minyanim (prayer groups) often meet in separate rooms or spaces within a common synagogue complex or nearby buildings yet count themselves as “meeting” as one community. This is a statement about unity in diversity which reduces the relevance of spatial proximity to its real insignificance. Such a diverse but united synagogue grouping itself meets in physical isolation… but not in spiritual isolation… from the rest of the Community of Israel. It does not take much of a stretch of halachic imagination to consider that distant affiliated members “not physically present” could be “really present”."


Many of us are unable to attend synagogue or chavurah services.
Many of us would like to be sitting around a family table on a Friday night, but aren’t.
Some of us are happy being single but would still like to feel “included”.
Some of us have no intention whatsoever of forming nuclear families.

Some of us simply can’t.

If you are reading this and you are included in any of those groups….Or if you are a Jew with no current access to community or family gatherings… Remember you are still very much a member of Knesset Yisrael: the spiritual yet real Community of Israel.

You are not the only one standing “apparently alone” at the Shabbos table making kiddush.

We are all “there” in spirit.

If you would like to celebrate that on this particular Erev Shabbos:

Think of the “Community of Israel”

and bless them with your attention:
.


May God bless us keep us
(as we ask for practical help: material needs, employment, purpose and health)

May God’s face shine upon us
(as we ask for emotional and creative help: The inspiration and support we need to create the Love, Justice and Mercy which is God’s real presence in the world)

May God’s face turn to us to give us Peace
(as we ask for spiritual help:
That God may see/hear us in the times when we feel we cannot see/hear God).

The article you have just read was written in 2007. In July 2009 I arranged the composition for choir and produced two little videos to give those who cannot read music notation some idea of how it might sound. You can see and hear all that HERE .
Posted by Jewish Hermit on 1.6.07

click on the above graphic to read this article from 2010

INDEX OF Commentaries by Parshah

You are free to use any of my own text, artwork, images, or music if you acknowledge author and source clearly, subject to these simple conditions.